Alf Yngve blasts back onto the C64 with another fantastic compilation of action-packed shoot 'em ups! Jump into your trusty Zap Fighter and blast your way through THREE exciting games packed with zapping action, power-ups and plenty of air and ground-based targets to obliterate! Richard Bayliss has also contributed to this release by adding specially coded front-ends to each game, in-game enhancements and has supplied thumping soundtracks as well!

· 3 Zap Fight games for the price of one!

· Compatible with PAL C64 systems ONLY 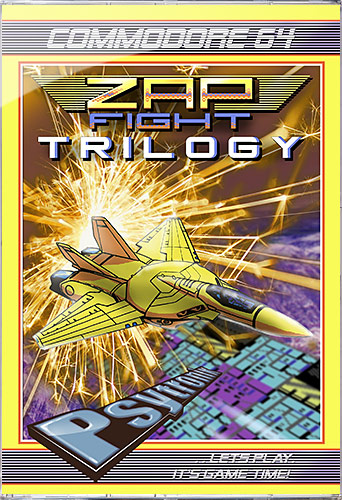 THE ZAP FIGHT TRILOGY is a compilation of enhanced SEUCK games for the Commodore 64. You can play the game in a C64 emulator (we recommend VICE) or you can port the game onto real C64 hardware if you have the resources to do so.

The download file features the .d64 (disk version), .tap (tape version) and .prg (c64 program files). The files included in the download have been tested on and work perfectly on the C64Mini/Maxi systems.

In order to download this game you must purchase it at or above the minimum price of $3.99 USD. You will get access to the following files:

First of all, that the three games were combined in a trilogy is a good idea. I played especially "Zap Fight 3" in last days, because the other two games i already knew before, and i am a little bit ambivalent, to be honest. While the graphics, the weapon-upgrade system and tune/sound-fx are nice, i find the gameplay of the third part a bit too monotonous. And i wondered a little bit about that, because especially the special-edition of the second part of the series shows, how this point can be better. I also directly compared the older "special edition" of "Zap Fight 2" with the new trilogy-edition of this game and i noticed, that on the screen, there is more going on, in the older special edition. The trilogy edition of "Zap Fight 2" maybe looks a bit better, with these new displays on the outside, but apparently this was at the expense of the amount of attacking enemies, i fear. And if i would have to choose, i clearly prefer more action on the screen, more enemies and more variety in the gameplay/attacking-waves, over little-bit better graphics. Therefore i clearly prefer the older special-edition of part 2. Would be great, if sometime later, a "special edition" of the third part would follow, in which there's a lot more action on the screen (like in SE of part 2), even if some of the new graphical elements must be dropped for this. When you ask me, the older "special edition" of "Zap Fight 2" is the best construction-kit game ever made so far and it would be great, to see an updated part 3 of the series as "special edition" also, some day.

Great trilogy. Only issue I see (unless there's something I overlooked) is that it doesn't save the high scores.

After playing the trilogy for a bit, having an option to go back to the game select menu would have been nice.

The poster has a VF-1 Valkyria :P 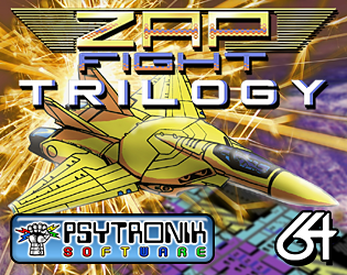