After thrilling C64 gamers with his masterpiece HESSIAN, Lasse Öörni returns to the C64 with the brand new action-packed run & gun arcade-adventure STEEL RANGER. Take control of a cybernetic hero and explore a massive world filled with traps, enemies and huge boss encounters.  If you liked HESSIAN you are going to love STEEL RANGER!

STEEL RANGER is also available  to buy on 5.25" floppy disk professionally packaged in the following versions for the C64:-

As humanity is forced to expand beyond Earth, they come into contact with a hostile machine intelligence born from their own creations. By initially using military shipments thought to be lost, it has mined other planets for resources and built a vast offensive fleet. Now mankind is stranded in a desperate war, with safety nowhere to be found.

United Military patrol ship "Scourge" led by commander Archer Hess picks up an unusual transmission sent from a barren planet - Ones & Zeroes forming an Omega symbol. Though possibly a trap, the ship is cleared to investigate. Its crew is equipped with self-charging "Ranger" armour suits, designed for combat against overwhelming enemies in any environment.

Steel Ranger is a game for the Commodore 64. You can play the game in a C64 emulator (we recommend VICE) or you can port the game onto real C64 hardware if you have the resources to do so. The download file features the .d64 (disk version), .tap (tape version) and .prg (c64 program files). 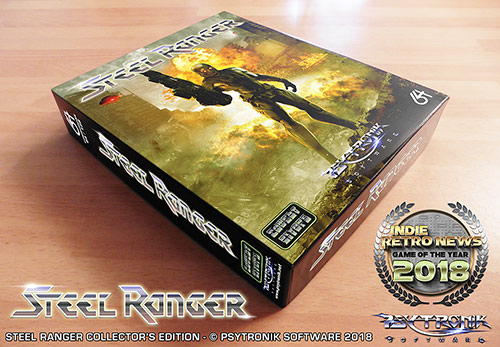 In order to download this game you must purchase it at or above the minimum price of $4.99 USD. You will get access to the following files:

Is anyone else having trouble getting this to run on NTSC?  I'm using a Mister FPGA and the game works fine in PAL mode, but when I load it in NTSC, it gets stuck on the splash/loading screen every time.  This only matters when I have it hooked up to a CRT TV instead of my flatscreen because they can't take a PAL/50Hz signal.

Just picked this up. This should be great fun on my c64 mini.

I loved this game so much that a video was born on its own ...

There are no words to describe this work for our beloved 8bit, a game that touches perfection ... Exceptional level design, action-shooter-platform all surrounded by a pleasant plot, graphics and first-rate sound, a title that owns practically everything. I try, but I don't find negative sides in this video game, maybe a little wasteful in the last stages, but nothing really complicated. Thanks for making it and remember "shoot or die!"

Best Sci-fi game on C64 and applause to Lasse Oorni for the awesome music and graphics on the game.

This was hands down my favorite game of 2018

All of your games look so perfect! I am, very soon, going to have to get them all!

I absolutely love the music in this game. Is it possible to purchase the soundtrack as MP3/Ogg?

Hi, the music is only available on CD at the moment:- http://binaryzone.org/retrostore/index.php?main_page=product_info&cPath=1&products_id=509

This game is awesome. I have a hard time putting it down. And it's huge! And on only one disk? I love it. I can only recommend to support the developers. Buy this. 5 stars from me.

It says the download comes with the .PRG file, but I only got the D64 version.

Works great on my C64 maxi, thanks! Greetings from Slovakia

Just purchased a C64 Maxi and it's a pleasure to play this brillant game a second time - now in the way it deserves!

does not work on sd2iec, tested on 2 types of sd2iec and 3 different commodore 64, I ask for support thanks.

Hi, the game works perfectly on my sd2iec - what issue are you having?  If it resets when loading from the sd2iec menu, simply type LOAD"*",8,1 (return) and the game should load and run.

You guys are amazing!  Everything has come together in this game just perfectly.  It takes the best elements of games like Turrican and Metroid, adds a fantastic soundtrack to the mix and puts it all together into this masterpiece.  Instant classic!

Great game with nice audio. Worked well on my sd2iec. Thanks!