From the same team that brought you Majesty Of Sprites and The Lands Of Zador we have a fantastic release for the Commodore 64 + Commodore Plus/4 and expanded Commodore C16*.  SLIPSTREAM is a visually stunning 3D shoot 'em up featuring fast polygon graphics, scrolling landscapes, animated backgrounds and great soundtracks.

SLIPSTREAM is also available to buy as a physical edition in three different formats:-

The PREMIUM PLUS DISK EDITION of the game is presented with full colour double-sided artwork in a clear plastic disk case.

In the year 14634 the inhabitants of the Omikron system built a shielding system to protect their home planets from asteroid showers that regularly struck their world.  Something went wrong.  An energy burst detected near the shielding station caused the robots defending the system to malfunction.  The robots began to classify whole planets in nearby star systems as asteroids and began attacking them.  It was only a matter of time before they started attacking inhabited worlds.

The SLIPSTREAM starship was constructed as a way of stopping the robots.  Your mission is to take control of the Slipstream through a remote interface, find the missing robots and destroy them.  GOOD LUCK, CAPTAIN.

Slipstream is a game for the Commodore 64, Commodore Plus/4 and Expanded C16 computers. You can play the game in an emulator (we recommend VICE for C64 and YAPE for C16 / Plus4)  or you can port the game onto real C64 hardware if you have the resources to do so. The download file features the .d64 (disk version) of the game + game instructions. 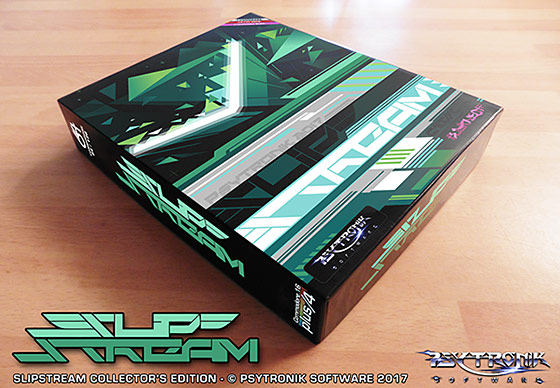