Psytronik Software in association with RGCD are delighted to present an absolutely stunning debut release for the C64 from Unrolled Loop Studios LLC - POLAR BEAR IN SPACE! Take control of an extremely cute Polar Bear in his quest to run, jump and zap through various alien-infested levels whilst collecting krystals.

Polar Bear is stranded in space! Having found a nearby alien space station on his quest for home, he must now locate the secret underground transporter and collect the 99 krystals needed to operate it. Only then can he escape! Artful aliens, onerous obstacles, and tenacious terminals stand in his way. Will you and his trusted companion Snowball be able to turn the odds in his favor?

NOTE: This game is suitable for PAL systems only.

POLAR BEAR IN SPACE! is a game for the Commodore 64. You can play the game in a C64 emulator (we recommend VICE) or you can port the game onto real C64 hardware if you have the resources to do so. The download file features the .d64 (disk version), .tap (tape version) and .crt (c64 cartridge version).

In order to download this game you must purchase it at or above the minimum price of $4.99 USD. You will get access to the following files:

Really, really slick!! loving the sensi feel and the depth. Will be reviewed in the next Reset mag

Can’t wait. Definitely much more depth than I first anticipated. Amazing fx, too.

Great game, many classics references in a great experience on its own, really a great game! Is a sid file of the music available?

Love this game, too! Great references to older games, but very original by itself.

Not sure if there are sid files, but the Collector's Edition disk version comes with a soundtrack CD, and the limited edition USB tape version has MP3s on it.

Space, a polar bear, what more could you want! Love this.

Reply
Kai Heikkila313 days ago
Here's my full playthrough of the game! :)
Reply
peetzee299 days ago(+1)

Ha! A speed run of sorts. I'll have to see if I can go faster than this. Didn't realize trying to break speed records could be that much fun with this game.

Great game but I hate highscore tables which are not saved. ;-)

testing in sd2iec thank you!!!!

Unfortunately I must say that it does not work, I load the sd2iec program with the command load "* fb", 8.1 loads the sjload I look for the d64v I open it I load the prg and the ready of the basic immediately jumps, I give a list and the error appears " overflow in memory ". I copy the d64 from the sd2iec folder to / from the card I do load "polarbear.d64", 8 and it stays in loadning and does nothing, I try one more time with load "polarbear, d64", 8,1 now to load the assembling sentences from memory and a black box remains and does nothing at all on the screen and the sd2iec remains eternally loading the d64. I continue with the .tap that I recorded on cassette unfortunately

The game loads and autostarts fine for me on my SD2IEC. This is how I do it:

Because SD2IEC doesn't work with all fast loaders, loading takes a few minutes in either case, but you should see Polar Bear tap his foot while the game loads.

That way it worked a thousand thanks

Hi, I've loaded the game with no problems into my C64 using an SD2IEC and the fb64 browser that is included with it. Once the .d64 was mounted I did have to reset my C64 using my Action Replay cart and then load it the standard way with LOAD"*",8,1 (RETURN). I will see if there is a simpler way to get it to load via an SD2IEC.

the d64 does not work in sdiec I am trying with the .tap to popder to play it in my Argentine model c64c (pal)

PD using the tap turning it to audio and recording it on a blank tape and loading it to the old one worked!

Hi, an SD2IEC friendly version of the game will be made available very soon!

Thank you very much great game and just a small report of something that I think is a bug, in the presentation after choosing f1 or f7 the presentation mode flashes badly, it comes out of colors, you see the background of other things and it seems to be something from the video ( vic) I tried it with a drean commodore 64 drean commodore 64c and it remains the same it does not affect the game that loads perfect but if the presentation is very ugly, in the vice emulator it works well, therefore I imagine it is something of incompatibility with the chip video (vic) greetings

The game in the CRT file has a problem. VICE EMULATOR, EASY FLASH 3, THE C64 MAXI emulator runs the game up to a certain point and the game crashes. Have you checked what is the cause of this error?

Hi, do you have any more details of where the game crashes so we can look into the problem?

Sadly can't get this to run on my Kung Fu Flash (latest firmware), either disk or cart :(

Did you try both cart versions? The Ocean build works on Easyflash.

Ah-HA! There was only one cartridge image in the ZIP I downloaded, now there's two. \o/ I'll slap that on my KFF & give it a go!

:3 Beautiful! I'll gift this to myself in January for my birthday. So cute! I love polar bears! 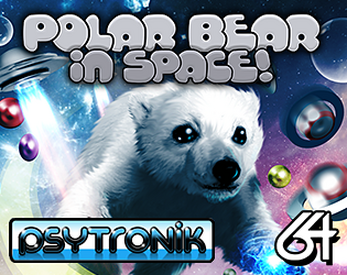 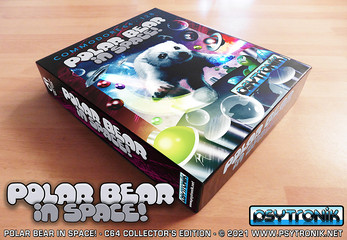